I heartily recommend Matthew Grant's comprehensive summary of what we learnt about the insurance accelerator scene at InsTech last week. It's forced me to write about something else so here are some thoughts about personal thoughts on the effect that the accelerators are having on the innovation scene based on Matthew's article and and personal experience of the working with insurance innovators over the last few years.

1. It's still really difficult to get early stage funding for new InsurTech businesses. There are a few new funds who intend to specialise in it, but most of the high profile VC's in the space prefer the comfort of Series A where there's already a product, customers and validation.

2. In these circumstances the accelerators play a very important role. In many cases they provide the only viable option for an aspiring innovator to get a new InsurTech business off the ground.

3. The accelerators are learning all the time and the experience they acquire each year will be passed on to future innovators to the benefit of all. They too are learning and failing fast.

4. They all have different models, fund and support in a variety of ways and have to compete with each other. Aspiring innovators need to shop around.

5. In the past year there has been a definable change in both language and approach from the innovators. Last year we heard a lot about disruption. It was all about taking on the incumbents, but now it's much more about partnerships and co-operation. The accelerators have played a big part in that.

6. The London market has not yet woken up to the benefits of accelerators. True, StartUpBootCamp are here, but they recruit globally and like all accelerators have a strong retail bias.

7. Aviva is the only UK based insurer with an accelerator. XLCatlin have access to their XL Innovate VC fund. That's about it, although there are others on the way.

8. The InsurTech scene in Munich is every bit as vibrant as ours and better supported both by local government and the insurance community. Italy probably leads the way in insurance telematics/IoT right now.

9. Brexit is holding back external InsurTech investment into London and the UK. A couple of global players have deferred initiatives awaiting further certainty on timings and passporting rights

10. It's still far easier to raise significant early stage investment in the US where valuations are higher and the risk appetite greater. That means there's less of a requirement for accelerators there.

11. The more fundamental consequence of getting serious money into a start up at an early stage is that you can recruit top talent both from the incumbent industry and related skill sets life data science. So in the States they are attracting better quality more investable innovators, who get longer runway and therefore a greater chance of success.

12. The argument that that the P&C incumbents have nothing to learn from innovators because only retail business is going to be disrupted and speciality is an art form that technology can't effect remains as fatuous as it always has been.

13. In an industry whose lifeblood is data, everyone needs to understand the extraordinary things that technology can do with data in terms of customer insight, risk assessment and predictive analytics.

14. Where the specialty markets have a complete blind spot is failing to appreciate the way that data analytics innovation is collapsing the value chain. Where Swiss Re and Munich Re have really stolen a march is in engaging with start ups who have new products and new distribution methods.

15. In the brave new digital world, these start ups acquire our customers, own the data about them and the risk and apply new risk analytics. All they need to go end to end is capital, a licence and the some technical and historical insight.

16. That's exactly what they get from Munich and Swiss who then get access to the client at source. There's just two parties in the full chain - start up/MGA and a reinsurer. That same chain currently feeds 5 or 6 mouths at the moment - not for long.

17. The classes of business most susceptible to this model is 40% of the market that London currently handles under Delegated Underwriting Authorities where data quality is dreadful and regulatory pressure increasing. Reinsurer competition in this space involves complete - not just brokers, but insurers as well!

18. Talking of brokers, where are they in all this?  I can't see that any of the big ones have tie ups with accelerators or funds/labs of their own. If they do, the innovation community hasn't yet heard of them!

So, here in Europe accelerators have a vital role to play - that is until there's greater risk appetite from the early stage venture funds and that's likely to be for a long time yet.

So, as with rural pubs and farm shops, you need to support your local, except that the London market doesn't have one yet. In the absence of either a relevant accelerator or early stage funding, don't be surprised when the Germans and the Swiss come and eat our lunch. Vorsprung Durch Technik applies to insurance as well as cars!

The previous week’s InsTech London session showcased eight growing on data analytics companies. This week 10 accelerators and incubators were up on stage. This is a rapidly growing area in insurtech. Almost every one of the organisations presenting has launched their insurtech accelerator or incubator in the last 12 months. 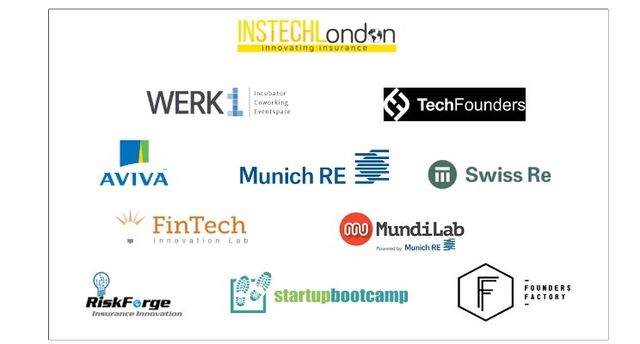