As usual, the excellent CB Insights and Matthew Wong were first to publish some end of the year analysis on where InsurTech investment went in 2016.

The key headlines were that InsurTech startups raised $1.7B in 2016 across 173 deals. That's down on the 2015 figure of $2.67B (but those figures were slightly skewed by two massive investments totalling $1.43B in Zenefits and Zhong An)

I was more interested in the geographic breakdown shown in the CB Insights chart (figure 2 below).  It's confirmation of what's pretty obvious anecdotally, which is that the majority  of InsurTech investment is being made in the US. There are several reasons for that:

I was interested to see how these shares of Global InsurTech Investment (GII) correlated to each country's Share of Global Premium (SGP).  For obvious reasons the 2016 data is not yet available, but using the 2015 data produced by Swiss Re I have produced this home baked chart (Figure 1 below).

For ease of reference here are the key stats.

So, the US punches way above it's weight, the Japanese are seriously hamstrung by their culture and the non exportability of their approach, Germany is playing to par and the French better do better if they want to pinch UK post Brexit opportunity.

Which brings me, parochially, to the UK.  It's 6% share of InsurTech investment suggests that around $100 million was invested in the UK. That doesn't sound very much does it has us punching well below our weight, despite it's importance to the economy as a whole.

Some will be surprised at that as the perception is that the UK is rather good at this stuff, that Start Ups love London and that being centre of the Fintech world would rub off on InsurTech. That's not the case though and I think the main reasons for that are these:

- our VC community is more risk averse than it's US counterparts preferring to invest only at Series A when there is a working product, validated model and active customers

- the London market investment (TOM) in bringing it's infrastructure into the 21st century is a massive distraction and is consuming investment budget.

So, what will InsurTech investment in 2017 look like? More of the same? My view is that total global InsurTech investment will continue to hover around the $1.7-2.0B mark next year, but that deal sizes will increase as the quality of entrepreneurs improves and clear winners in some of the most competitive spaces start to emerge.

The US will continue to punch well above it's weight, but their share of the total will decline slightly as the other main insurance countries play catch up, including the UK. The UK will have to grapple with the Brexit effect which is already proving a drag for UK Insurtech entrepreneurs with pan European ambitions and which might contribute to further investment under performance here. I would also be amazed if there wasn't a significantly increased contribution in 2017 from either Japan or China or both.

So, someone once said, I don't know who, that "an unsophisticated forecaster uses statistics as a drunken man uses lamp posts - for support rather than illumination." That sums this post up nicely. Let's see just how drunk I was in 12 months time. 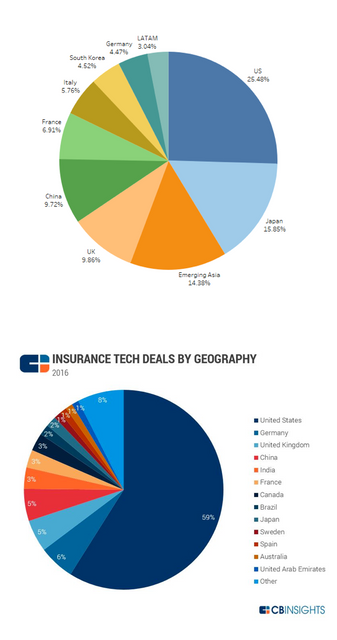